Dear reader, I need your help in finding clues and details for the following puzzles which came by during my research work into the service history of the H-43.  Any information, how small, is most welcome. Please write me :   johan.ragay@gmail.com

The following picture was published in the premier issue of "IRANIAN AVIATION REVIEW"  No.1 of January 2010. For more information about this excellent magazine please follow the link. Credit for the picture, which was taken at Kermanshah, Iran in 1969 goes to "Iranian Aviation Review" , from whom I received permission to reprint the picture here. 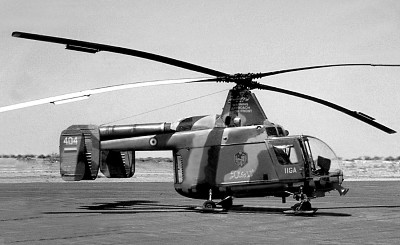 The Iranian Gendarmerie (IIGA) received 3 HH-43 Huskies in 1968. They were assigned to IIGA on temporary basis and according to the magazine article the three remained property of the Iranian Army Aviation. Because of the camouflaged scheme, which was very unusual for aircraft of the Iranian Forces, at least the Huskie in the picture could have been on loan from the USAF. It is not known if the other 2 were camouflaged as well.
Because of the temporary assignment to the Gendarmerie, as well as the picture date, 1969, together with the camouflage scheme lead me to the question if it would be possible that the Iranian Forces received the following three HH-43 on loan during late 1968 :  60-0266 , 62-4541 and 62-4543.  All three had been reworked by Kaman during late 1968 upon return from assignment to the Colombian Air Force (MAP aircraft). The camouflage scheme must have been applied during the 1968 overhaul and 60-0266 and 62-4543 were later (Sept and Nov 1969) delivered to the 38 ARRS in SouthVietnam. Huskie 62-4541 remained "assigned" to KACBC (Kaman) between Nov1968 and Aug1971 but was marked as "Loan/Lease"  at the IndividualAircraftHistory record. Any additional information would be most welcome.

The picture shows one other very unusual detail :  the cabin door is missing, and also the rescue hoist.

According to a Kaman Rotor Tips article (issue Jan-Feb 1970 page 5) "Phase II of a program to achieve significant reductions in the noise level of the HH-43B has been started by Kaman Aerospace Corporation. The program is being conducted under a contract from the U.S. Army Aviation Materiel Laboratories (AVLABS), the Army's aviation research center at Fort Eustis, Va. Under the new contract, Kaman will modify the rotor, drive system and powerplant of the HH-43B to attain noise reductions. The helicopter will also be flight tested at various speeds and altitudes to measure the degree of noise reduction".

Can anyone provide me with more details of the program and I would also like to know which particular HH-43B was used in the testing. Being published in the Jan-Feb70 issue and given the words "has been started by Kaman" and also "Under the new contract, Kaman will modify"  , this program and the test flights could have taken place during 1970. The aircraft mentioned above in "Subject 1"  62-4541, was on loan/lease to Kaman up until August 1971 and could have been the aircraft involved.  Any more information on this 62-4541 would be most welcome,

According to the above Kaman Rotor Tips photocaption (issue Nov-Dec 1972 page 4) "The first of 48 HH-43F HUSKIES scheduled for rehabilitation at Kaman Aerospace arrived at  company's  Bloomfield, Conn., plant in September. The "Pedro“ from Det.18, 44th ARRSq (MAC), Plattsburgh AFB, NY., flew the 225-mile route in about 2-3/4 hours, including a refueling stop at the Air National Guard facility at Schenectady, NY. On hand to greet the Air Force crew were KAC Flight Test representatives. Before the week ended, the second of the 48 aircraft arrived from Det.7, 44 ARRSq (MAC), Seymour Johnson AFB, NC.

Under a contract received from Warner Robins Air Material Area (WRAMA), Air Force Logistics Command, Robins AFB, Ga., 48 HH-43F HUSKIES will be rehabilitated. The firm fixed price-type contract, valued at ap­proximately $1.8 million, also provides for the analytical condition inspection and flight testing of 10 of the 48 air­craft, and contains an option for the rehabilitation of 50 additional HUSKIES beginning in fiscal 1974.

Over 90 percent of the aircraft work will be performed at Kaman's production plant in Moosup, Conn., with flight testing at the company's facilities in Bloomfield. The air­craft began arriving at Kaman in September. Delivery of rehabilitated aircraft will start in December and, with the option, continue into 1974".

Who can help me to reveil this story  ?,