They were ferried to Laredo AFB, TX  by Captains Bert E. Cowden and Theodore C. Vurbeff .

This was the first helicopter unit in the Air Force to become operational utilizing the        H-43A and the Fire Suppression Kit.

Working with the Air Training Command Standardization Team, this helicopter section helped establish the procedures later used by Local Base Rescue detachments throughout the Air Force.

As for the flying part, the H-43A was noisy with the reciprocating engine right in the back of you, the fumes made you sick, it was rough and shaky and at times scary.  We sat right behind the pilot, could see his every move and the instrument panel.  It was very cramped and had little room to stretch, being a short guy I didn’t have as much trouble getting in or out as our bigger guys, especially with our bunker clothing.  For one thing you got plenty of air and got to see everything below.

Laredo was hotter than hell ; the temperature on the ramp got to about 120° or higher and on a few occasions the chopper didn’t have the power to get off the ground with the 1000 lb. FSK so we took off without it.  Towards the end of the month when no one wanted to go fly anymore, I would volunteer to go fly around the flagpole.

But the biggest flying thrill was when one of our pilots used to do 360’s from different altitudes, one right after another. The first couple times I got sick, NO BULL!!!.  My scariest flying experience was when we went on a night training flight (Pilot, Co-Pilot, a mechanic and me).  The pilot was going to give this co-pilot training on “How to recover an out of control chopper”.  Anyway, we flew out away from the base and it was pitch dark (not sure of the altitude).

The pilot told the co-pilot to cover his eyes as he put the collective control down and put it out of configuration. We started dropping down fast!!!

The co-pilot was attempting to get the chopper back in control and it kept on dropping and I started bracing myself as did the mechanic. The pilot took over the controls and it seemed like an eternity before he flared. When he turned on the floodlights, we were skimming the top of the mesquite trees maybe 10 or 12 feet from the ground.  I thought for sure we were going to crash and maybe almost did.  We flew in silence back to the base and nothing more was ever said.  That memory persisted for couple of years and I had some bad nightmares.  But the best part was when I rode in the co-pilots seat and one of our  pilots would let me handle the controls, nothing fancy just left and right turns and up and down.  This was a great thrill and I loved flying, I was lucky to get some “stick time”, I also got stick time on the B model there and at another base. When the “B” model came around, it was like a flying Cadillac and according to my Individual Flight Record, I logged my first flight in the Huskie  in November of 1961.

I have very fond memories of the Laredo Bunch (Pilots, Mechanics & Firemen) that I met there.  I keep in touch with a few of them:  Pilots - Lt Col(s) Clyde “Red” Lemke, Donald Van Meter, John E. Shaeffer and fireman A2C Frank G. Gonzales who came on board in 1962.

This sequence of shots taken at a recent demonstration by the base rescue helicopter, the Kaman H-43A illustrates the versatility of the new aircraft.

In First photo, "chopper" arrives at the scene carrying an airborne extinguisher and checks wind direction (not published here).

Photo 3, crew has jumped out of helicopter and prepares extinguisher for action.

Photo 5, the fire is under control and rescue has been accomplished

Helicopter will return to pick up crew and equipment after first flying "victim" to base for medical aid. Time elapsed for rescue operation is 60 seconds. 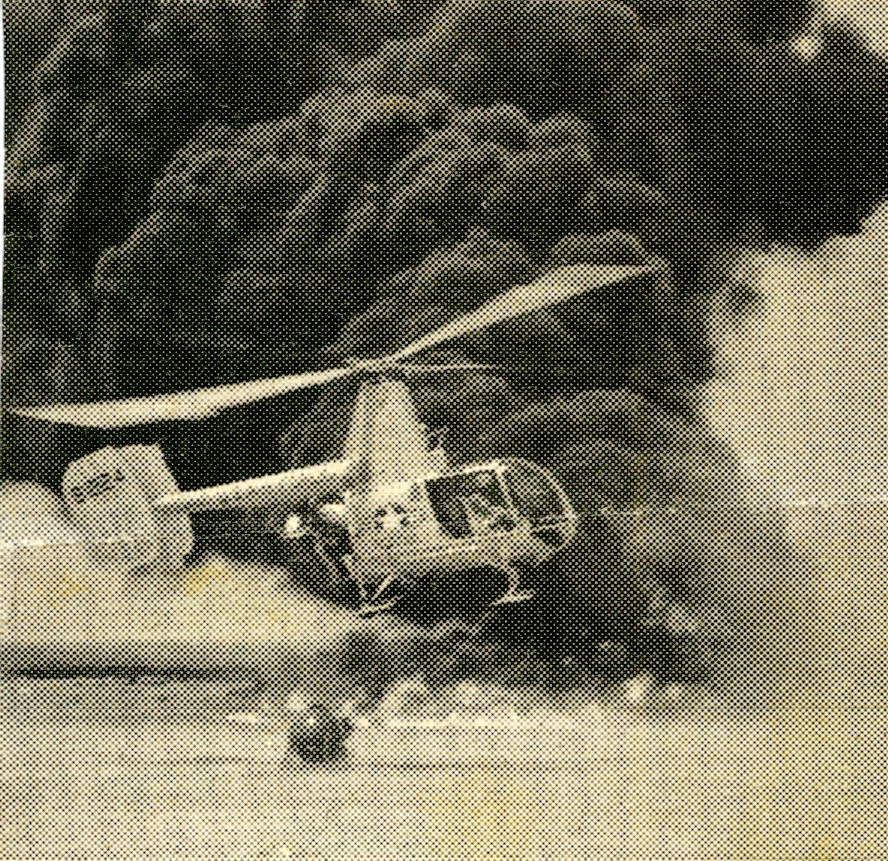 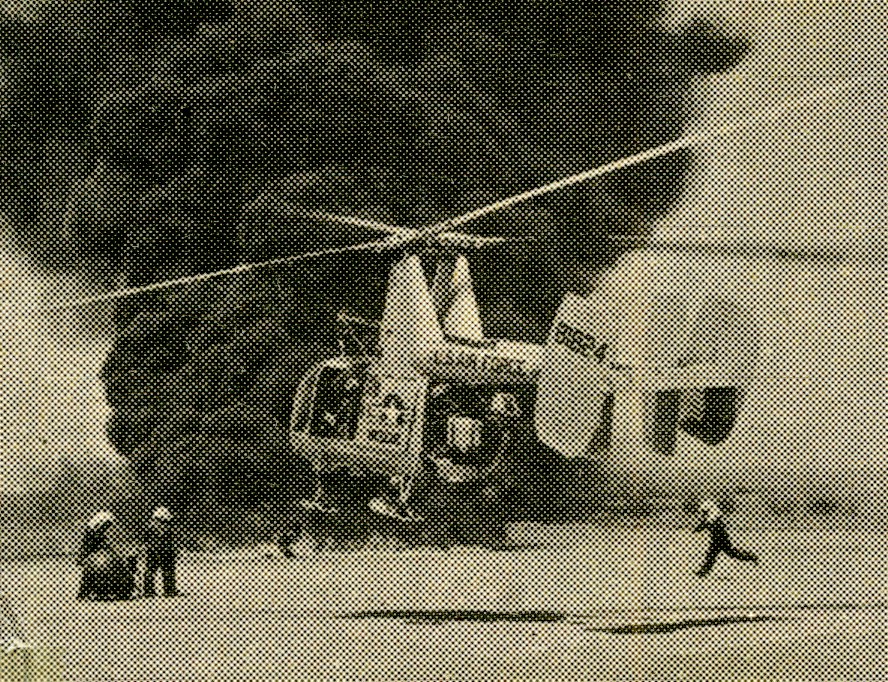 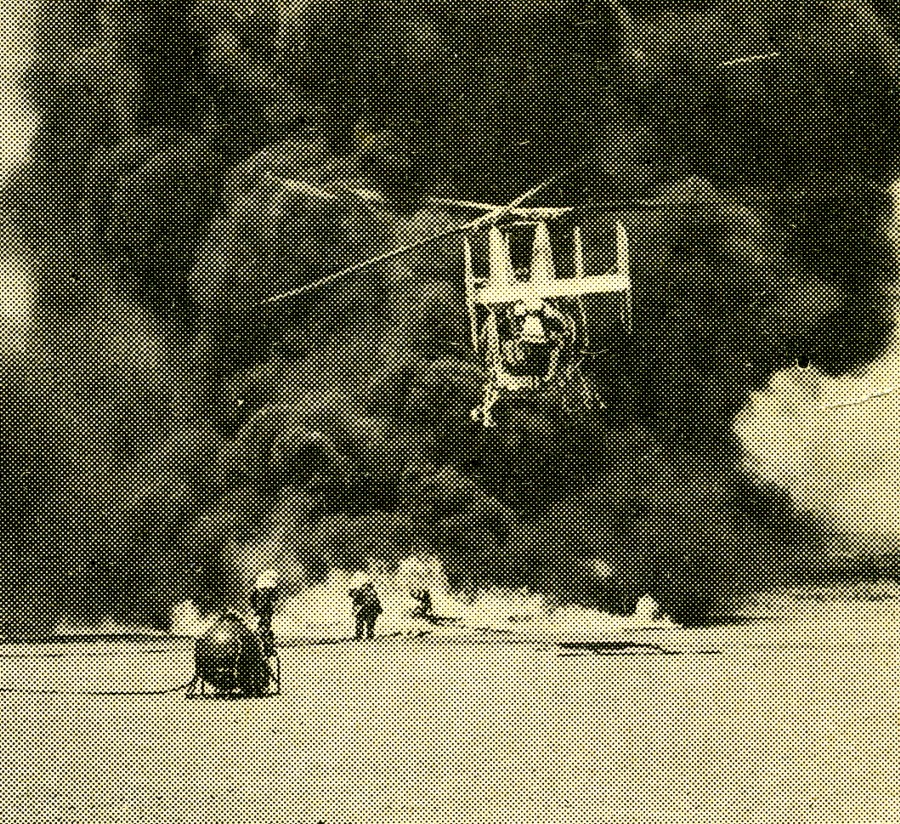 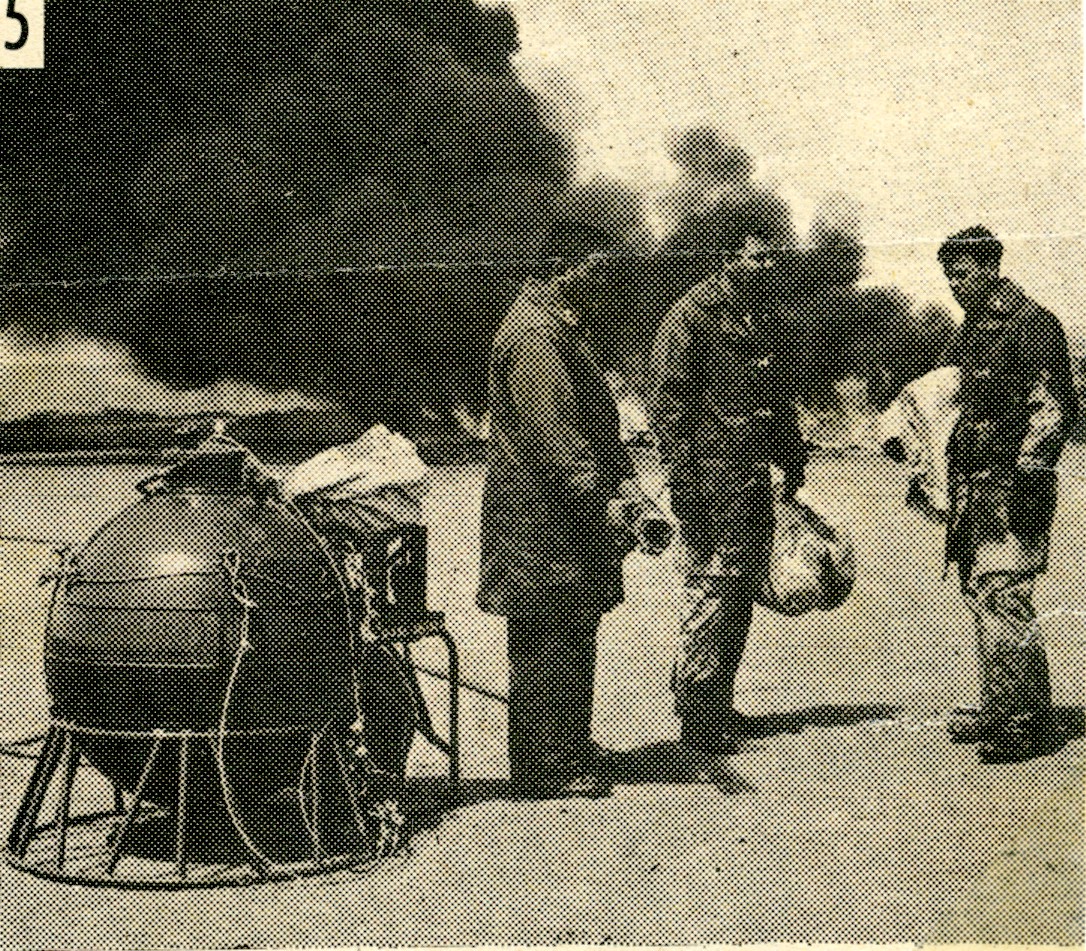 An Laredo AFB helicopter crew proved the capabilitles of the H-43A helicopter last week  after  the fatal  crash of a T-33A.

Just 48 seconds after the crash signal, the helicopter with fire fighting equipment was airborne and on its way to the crash scene. Arriving at the scene, Lt Bert Cowden, pilot of the H-43A, placed the fire fighting kit and crew in position and went to work suppressing the flames with the rotor wash from the chopper.

Because of the wide spread area of the fire and a malfunction in the fire fighting kit, Cowden had to fly within the perimeter of the flames to direct the rotor wash on the cockpit of the crashed aircraft. The heat was so intense that Cowden received minor burns about the face.

On the ground A/1C Jesus Munoz and  A/2C Johnny Hinson, both firemen, went into the fire area with  only rotor wash protection and ascertained  that no one was in the cockpit.

Lt Cowden continued to literally fight the fire with the H-43A and succeeded in extinguishing  the flames by using only the rotor wash from the helicopter.

Lt John Shaffer, Officer in Charge of helicopter section, had high praise for Lt Cowden and his crew. "Indeed these men demonstrated great courage in their crash-rescue mission. It is regretable that  there was nothing we could do to save the life of the pilot who had ejected."

Our crew was one of the first to use the FSK on an actual off base crash of a T-33A (s/n 52-9155 , 3640 PTW) on 09 July 1959 (the H-43A crew were Lt. Bert Cowden - Pilot, Airborne Rescuemen (ABR) A2c Johnny Hinson and yours truly). We came to find out that running the half-mile did not work in brushy areas or in trees. When the aircraft impacted the ground it scattered debris in wide area, we sat the FSK down and the chopper got into position, the nozzle-man (Hinson) took off to the side, then attempted to come back, but got held up in the brush. I went to help straighten out the hose and started spraying the wreckage.

Then the hose busted from a piece of hot metal in the area where foam had not been sprayed. I walked to the wreckage just with rotor wash and found no body in the area. Seems the pilot had bailed out but the chute did not deploy. His body  was found nearby. After chopper landed, we got a stretcher and  loaded the body. We flew back to the base and got back on alert status with the backup FSK. Later a ground crew was sent out to pick up the deployed FSK and hose. An incident report was made and a copy was sent to rescue headquarters. After that a new method was designed to load the hose starting from mid-point with a fold sticking out in order to grasp loop and nozzle and head straight to the fire. I went on to participate in several other crashes. 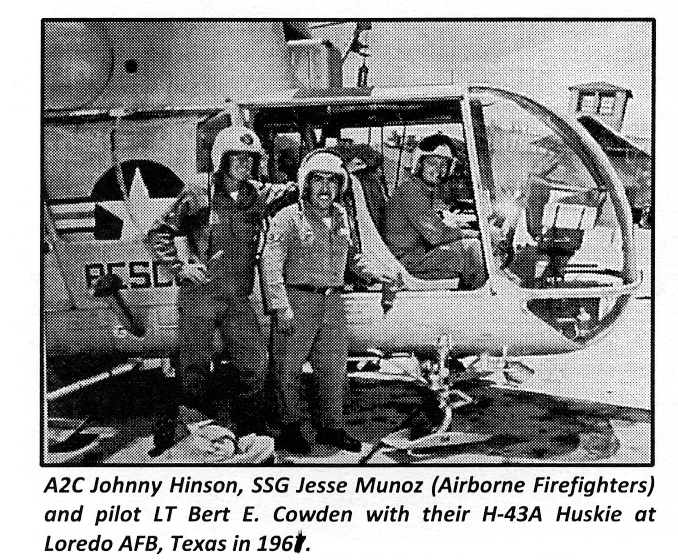 CARC Det. 36 claims unique operation record of accomplishment with the H-43A helicopter in carrying out their air rescue mission. The detachment has compiled a formidable record of firsts during the past three years.

3.1.4.1    Capt. Bert E. Cowden and Capt. Theodore C. Vurbeff  accepted and delivered the first two H-43A helicopters from the Kaman Aircraft Corp. to Laredo AFB.  Working with the other members of the detachment and the Air Training Command StandardizationTeam, the two helicopter pilots worked out rescue procedures, utilizing the fire-suppression kit, now used by rescue detachments throughout the Air Force.

3.1.4.3    On 15 Feb 1960, Captains Cowden and John C. Shaeffer played leading roles in a dramatic rescue operation when 20 fishermen were stranded on the south shore of Lake Falcon by a violent wind  and rain storm. The two pilots flew eight separate sorties, all in marginal wind and visibility conditions, and brought all the stranded sportsmen to safety. They were the first USAF pilots to receive the Kaman Scroll of Honor as a result of this mission. 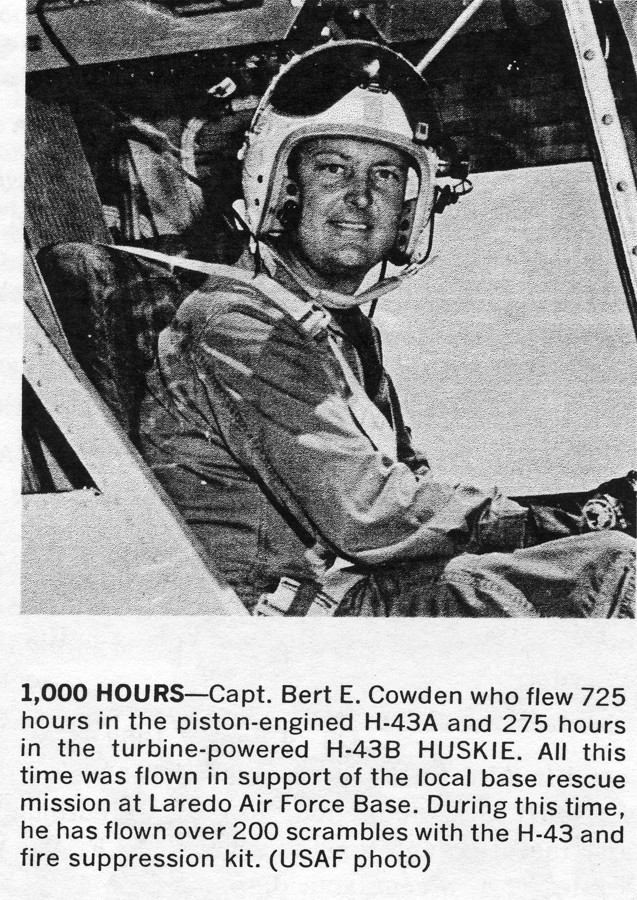 “I began my introduction to the H-43A at Laredo in January of 1960.  I was fortunate enough to receive my training locally with the pilots that picked up the first two aircraft for the Air Force.  That was Lt Bert Cowden and Lt Ted Verbeff, who in turn pretty much developed the Air Force firefighting procedures.