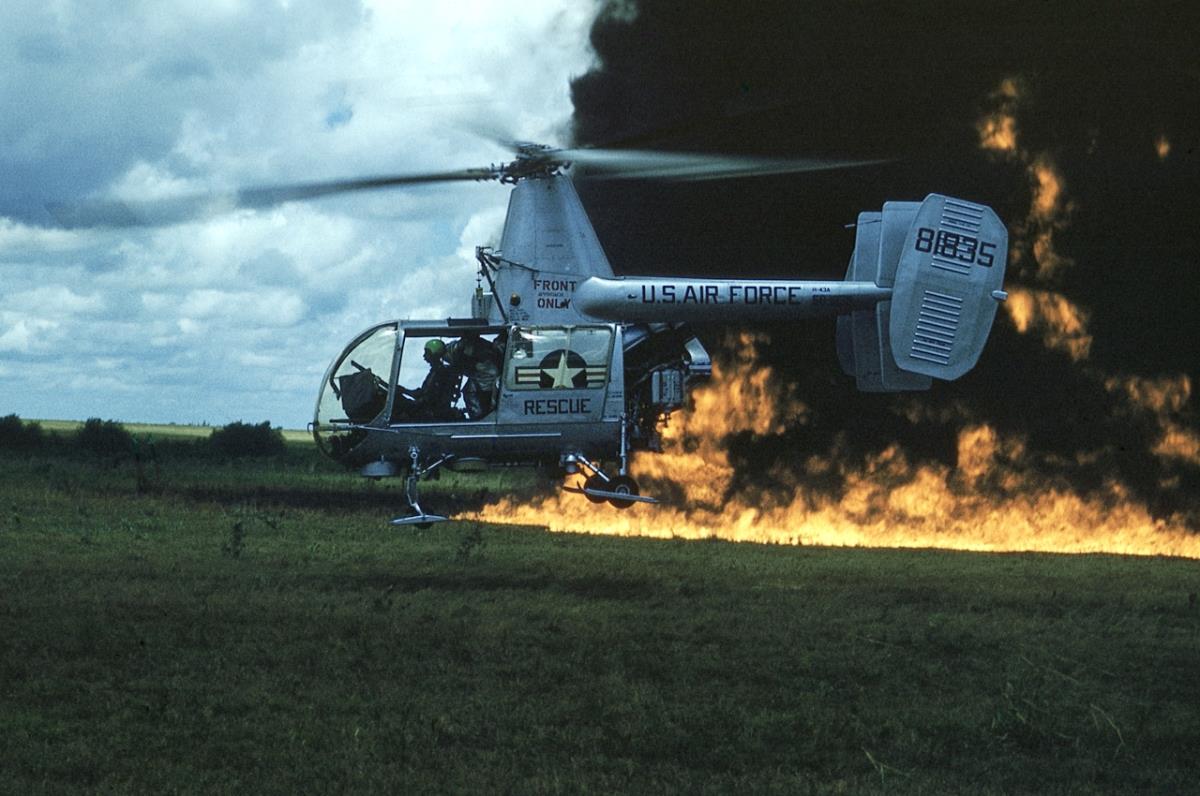 and in newspapers, as well as from personal accounts by the men who flew with the H-43A.

Some of the many documents availabe from the archive of the A.F. Historical Research Agency (AFHRA),

“She certainly isn't a legend, the H-43A. Most helicopter pilots today probably never heard of her. She didn't even have a name.

Today (ca.1995) , those of us who flew her 35 years ago, still refer to the old bird simply as the "A" model. All were assigned to the Air Training Command to provide crash rescue support.

Within two and a half years her career was over and she was shipped to the boneyard, replaced by her big sister the H-43B Huskie”.

The U.S. Air Force H-43A helicopter, selected to fill the local crash-rescue mission, was developed  by Kaman for operations in areas of mud, sand and snow.

Mission role for the H-43A with the USAF included standby air operation during mass airplane landings and take-offs, to locate and pinpoint any emergencies and accidents and bring back disabled crew members. Thousand-pound firefighting and rescue kit, including fire extinguishing agent, axes, bars, metal cutters, etc. can be suspended beneath the helicopter.  (Aviation Week -  February 23, 1959)

After reorganizations and reductions in strength that began shortly after the close of the Korean War, the need for an organized rescue service in the Air Force was again questioned in 1959.

But in 1961 the Air Rescue Service accomplished the necessary planning to assume both the National SAR Plan and the Local Base Rescue Helicopter Program. Later , the LBR function were  transferred from individual commands to the ARS.

The first H-43A coming from production line at Bloomfield, CT, was 58-1823,  which made it’s maiden flight on 19 September 1958. It stayed with the manufacturer for trials up to September 1959. Vance AFB, OK became it’s first LBR assignment. 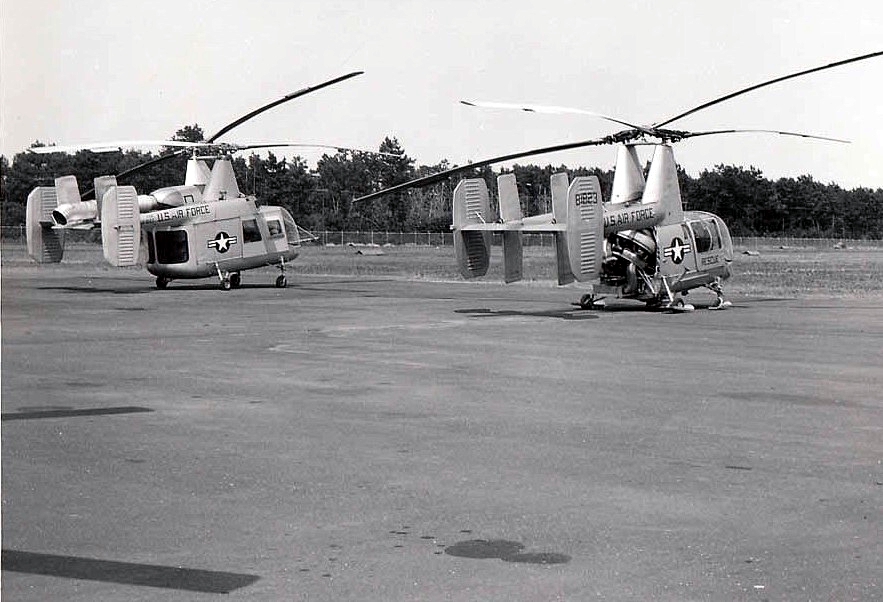 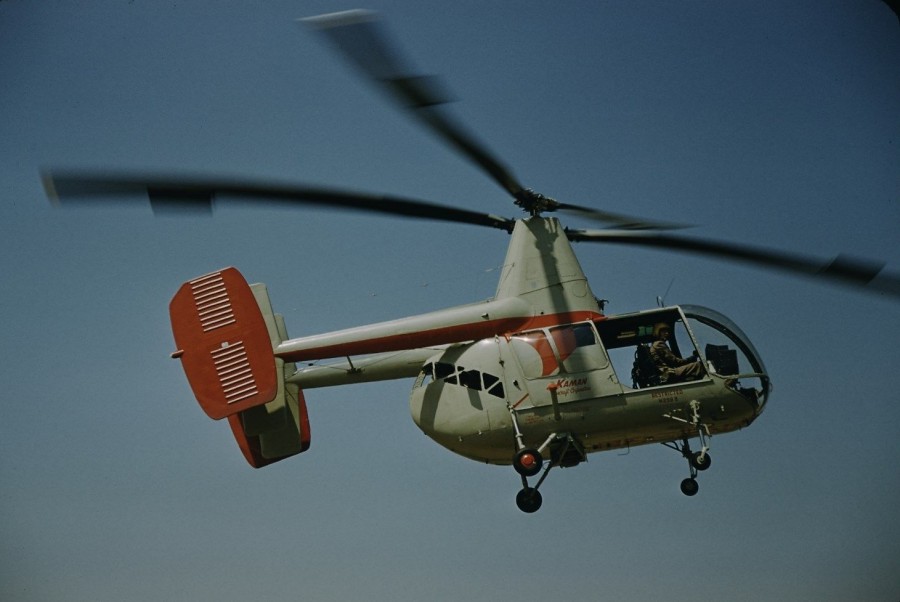 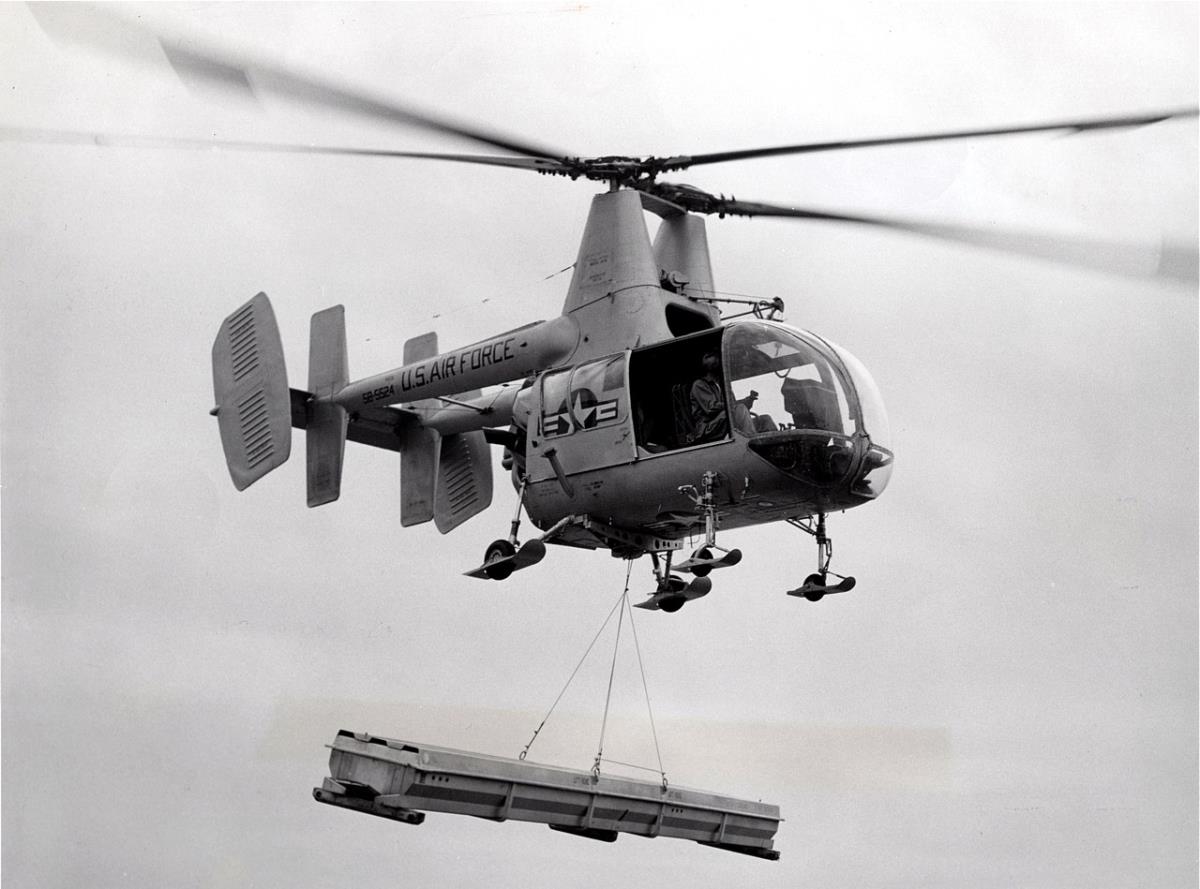 One  extra H-43A,  the 19th, with serial number AF 58-5524 was bought by the USAF and bailed to Kaman for evaluation in anticipation of the first production H-43A. Kaman used aircaft 58-5524 for various tests and called it in it’s reports “the demonstrator H-43A”.

This particular aircraft was former HOK-1 BuerNo. 129839. It was struck of charge on 23 Jan 1957 (after an accident at Camp Pendleton, CA on 19 Sep 1956). Transferred to Bloomfield, CT and restored, but it did not return to the Marine Corps. As Kaman Model K-600 the aircraft then flew with FAA Registration number N298B in a grey and red scheme and with Kaman title. First seen in April 1958. It had the newly developed four-fin tail mounted. By June 1958 the aircraft was repainted in sliver finish with USAF title and serial number. This 58-5524 always remained at Bloomfield, CT and was used for many trials, up into early 1963.

all 18 H-43As were accepted by the Air Force at the Bloomfield, CT plant.

A1C Jesse Munoz Jr. was one of the first firemen assigned to the 3640th PTW at Laredo AFB, TX.

In 2018 Mr. Munoz provided the following details for this moment :

Our story starts with a staff meeting for all Fire Department personnel at Laredo AFB, Texas in late February 1959.   The Fire Chief informed us that our base was forming a new unit called H-43A Local Base Rescue Section from Air Rescue Service and involved training base firemen. They were asking for volunteers, I was a young Airman First Class. The thrill of flying got my immediate attention and I volunteered.  There were eight of us and little did I know to what paths it would take me.

A few days later we were given an orientation flight on a H-19. Then they took us to see the H-43A. It looked awkward and looked much like an ugly eggbeater.  We wondered if it could really fly.  We started training in early March with a Kaman Aircraft Corporation Representative who taught us the capabilities of the H-43A and its FSK. Next, he gave us a briefing on the firefighting operations. We were also provided a booklet of operating instructions about our new “Toy” called the Fire Suppression Kit (FSK) and nicknamed the “Sputnik”.    He showed us how the FSK worked, we completed our training March 31, 1959 and received our certificates from the Kaman Aircraft Corp. 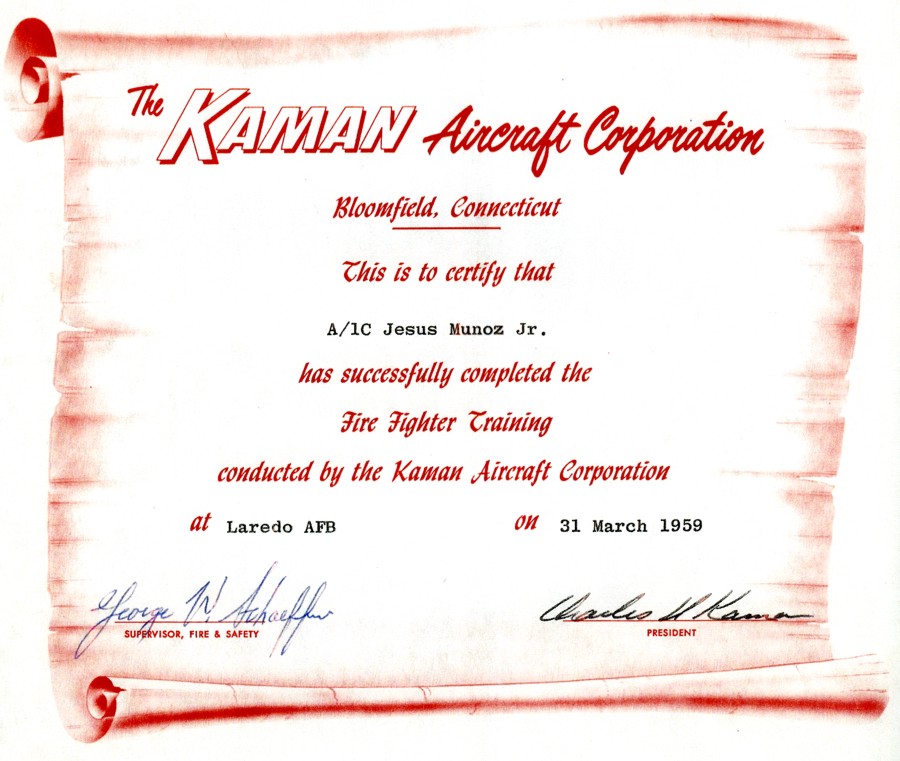 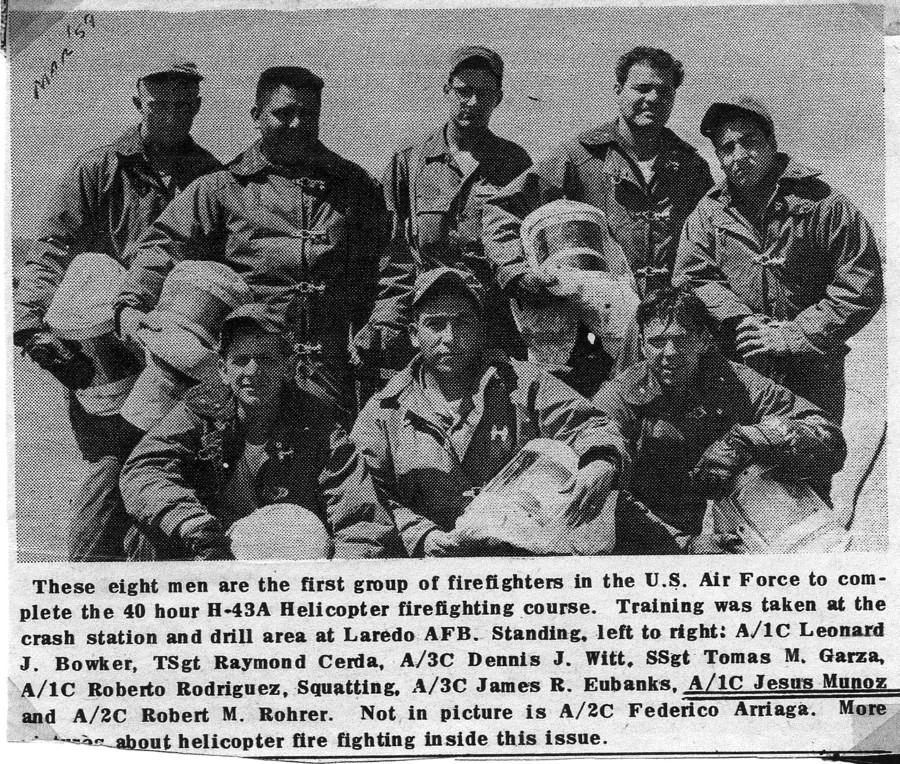 3.10   Known crewmembers who have been assigned to unknown H-43A units 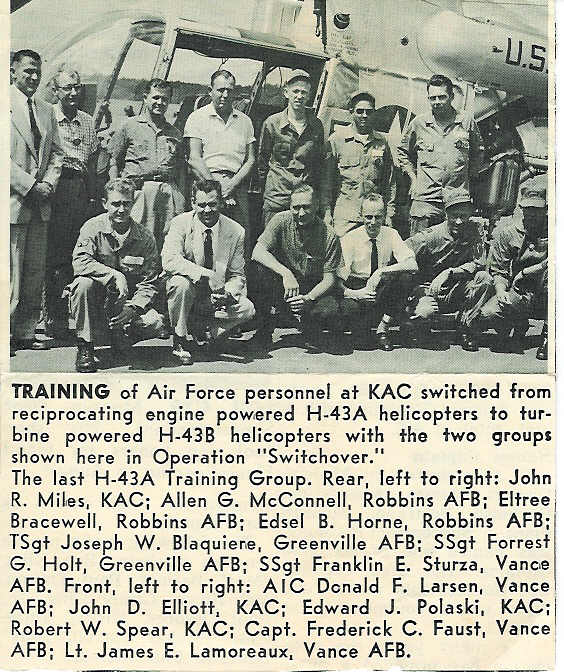 Hq USAF had directed that the 17 (one crashed)  H-43A aircraft gained by ARS upon assumption of the LBR program are to be placed in storage at Davis-Monthan AFB as they become excess to command requirements.

The airlift was effected by WESTAF C-124 aircraft returning to home station from IRAN at Hayes Aircraft Corporation, Birmingham, AL. Airlift was requested as a means of preserving the LBR capability at bases concerned by eliminating extended TDY of ferry crews from austerely manned detachments.

**   The N2851J registration was never applied. After storage at Eglin AFB, FL  HH-43A 58-1833 was transferred to Wright-Patterson AFB, OH (on an unknown date). It became part of the US Air Force Orientation Group (AFOG) , which performs ground-displays of aircraft on a mobile basis (source : BARG magazine).

At least as of August 1966, 58-1833 became a permanent display aircraft at the Florence Air & Space Museum grounds, Florence, SC.

After restoration during 1985/86 it became part of the Museum of Aviation, Robins AFB, GA. At first on outside display, as of 1994 on display inside the Museum. 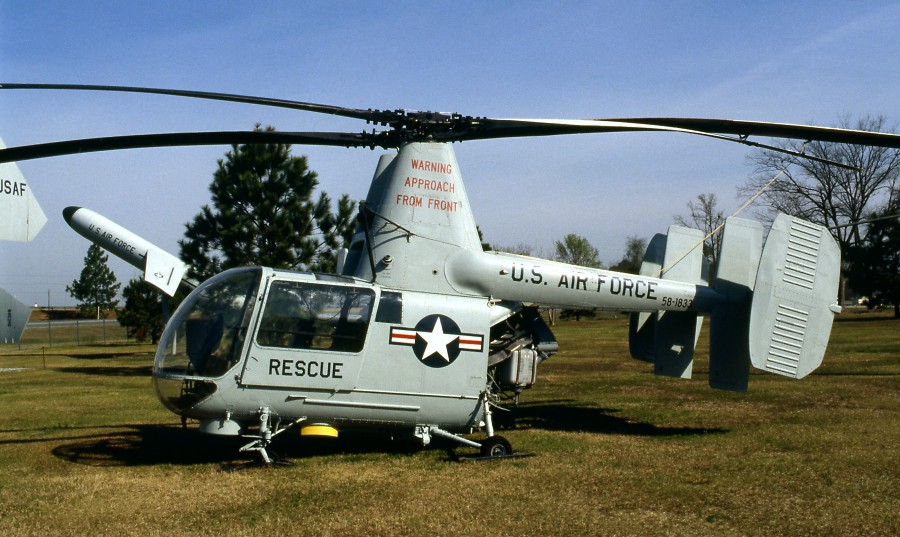 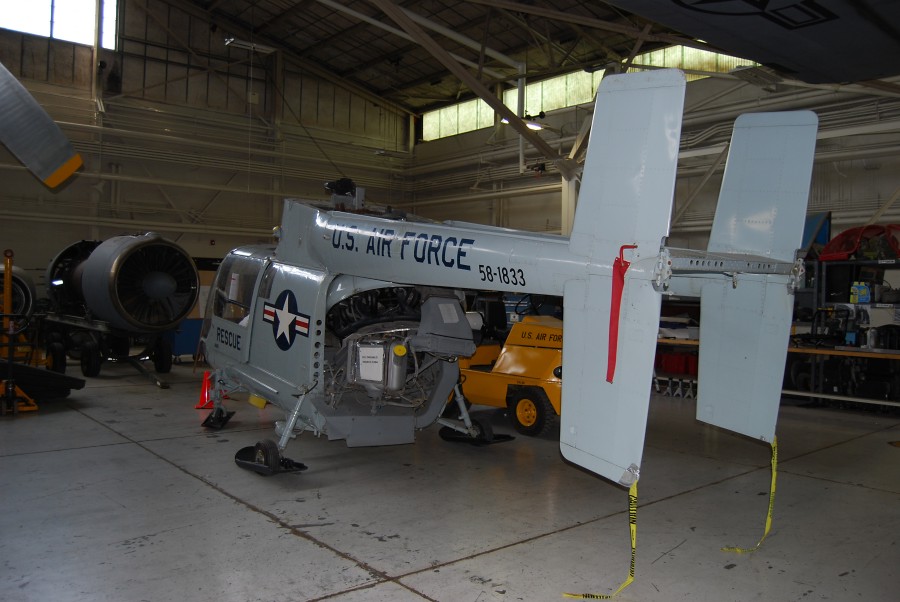 Thirteen HH-43A were bought by Rosenbalm Aviation, Inc. , Central Point, Medford, OR in February 1966. They were all in non-flyable condition, but by May 1966  N2853J was reworked and flying in it's new role, forest firefighting.

N2856J survived and finally became owned by the Classic Rotors Museum, Ramona, CA in December 2005. They planned to restore the aircraft to flying condition with a first flight planned for 2009, but that has never happened because of a tragic accident with a HUP-1 helicopter which occurred in Nov 2009.

7.0   Book with detailed histories for all civil operated Kaman HOK, HUK, HH-43A, HH-43B/F and their operators was written by Johan Ragay, published in 2009. 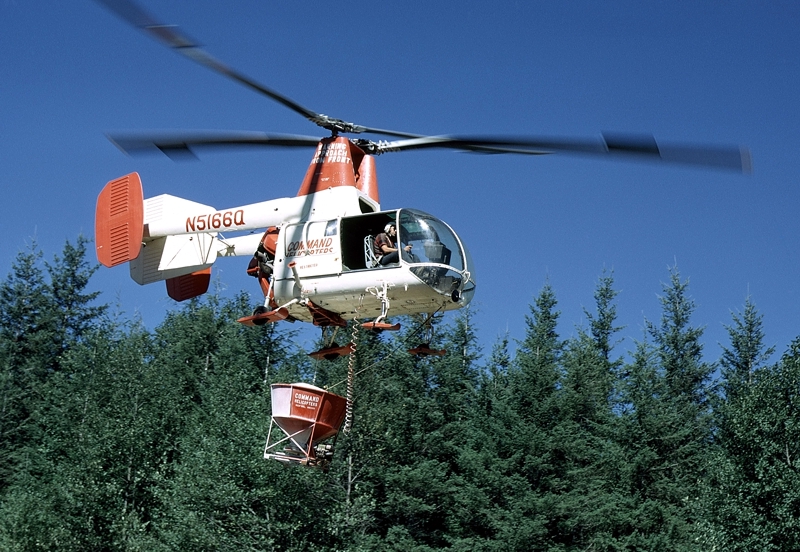 After his Air Force carreer, Mr. Bill Wall again became current on the HH-43A , the HOK as well as the HUK,  then owned by Command Helicopters Inc., Medford, OR.  During the period 1969-1972 he flew many hours in these helicopters. Forest firefighting and forest vertilizing in Washington State and Oregon were tasks undertaken with these helicopters.

For more photos of the H-43A flying with civilian registation , click here