FROM :  “A Chronological Listing of Rescue Reports as received from the field, by The Kaman Aircraft Corporation”

On the morning of 1 August, at approximately 0825, I taxied AD-5  132420 onto the starboard catapult of the USS Tarawa (CVS-40) in preparation for a catapult shot. Previous to this, the turn-up and all pre-take off checks on the aircraft were normal. I taxied onto the catapult and a normal hook-up was effected. The catapult officer gave me the signal for a full power turn-up and again the aircraft checked normal. I gave the ready to go signal to the catapult officer and he in turn gave the catapult launch signal I started to roll, but without the usual kick and acceleration one gets with a catapult shot. I looked at the catapult officer momentarily and then back to the bow of the ship. At this time I noticed the shuttle and bridle come to a stop at the end of the catapult track. All this time I had been accelerating with full power. It immediately flashed through my mind to try and stop the aircraft, but not knowing how much stopping distance was left on the flight deck , I decided to ditch as best as possible, leaving full power on.

Unknown to me at this time was the fact that the hold back release ring, a small fifty cent piece of circular metal which holds the aircraft until the catapult fires, had broken prematurely allowing the aircraft to move forward, letting the bridle drop free as the catapult fired. Upon leaving the flight deck I immediately retracted the landing gear and nosed over to prevent stalling. I established a gliding attitude in preparation for impact with the water. As best as I can determine the aircraft struck at a 10 degree nose down attitude in front of the ship. I left the aircraft immediately, not inflating my life vest at this time because you can swim much faster without it being so, and was about 10 yards from the aircraft when it was struck by the bow of the ship. I, too brushed against the starboard bow of the carrier. I swam as quickly as possible out from the ship, drifting back past it as I went. Meanwhile the ship was making a hard turn to starboard, giving me greater clearance from the aft end of it and the screws. At this time I inflated my life vest and was awakened to the fact that quite a fire had been ignited approximately 30 feet from me and was rapidly spreading towards me. All at once, it seems, I saw a helicopter moving in between myself and the flames fanning the fire, with it’s rotor wash, away from me, with it’s rescue sling, and was soon being hoisted skyward to safety. I found out later the fire was caused by a smoke light, which had been thrown overboard from the ship to make my position. I was carrying a full external fuel tank on the hop, which ruptured upon impact with the water, and the smoke light ignited the floating gasoline. The helicopter, the HOK-1, and it’s pilot Ensign J.P. McCullough, should be commended for the fine job of rescue they did. The whole ordeal from the time I taxied onto the catapult until I was back aboard the carrier took place in less than three minutes. My actual time in the water was approximately 50 seconds. It was one fine and quick job of rescue. 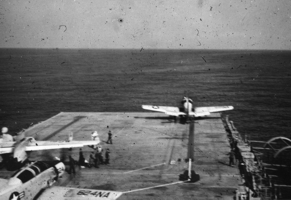 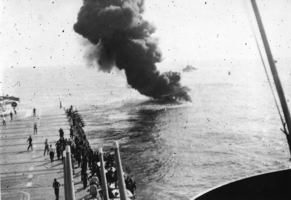 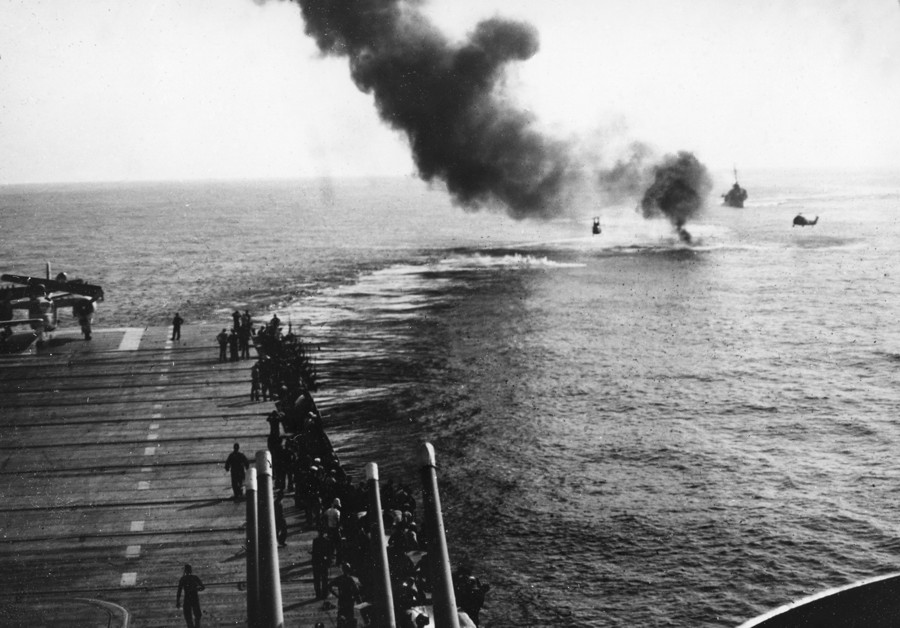 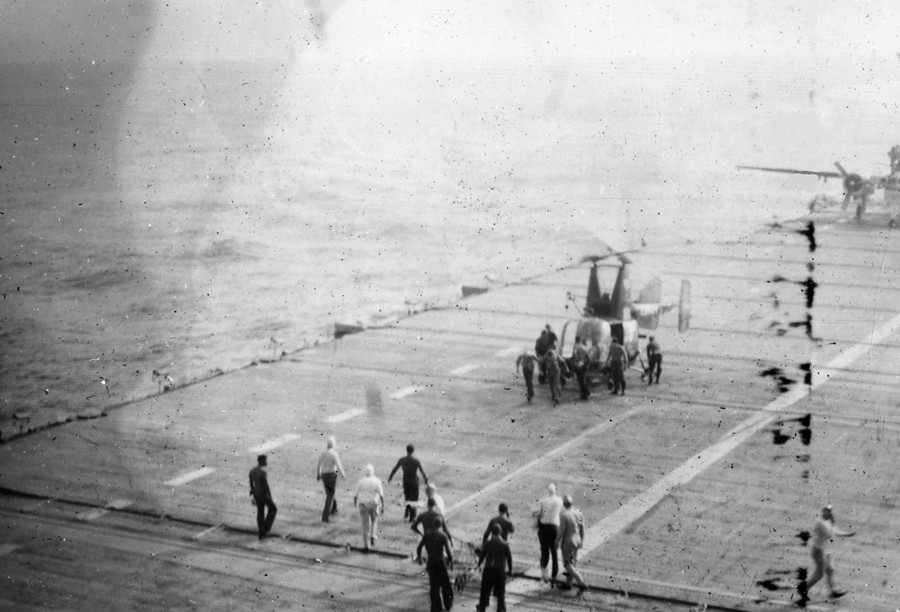