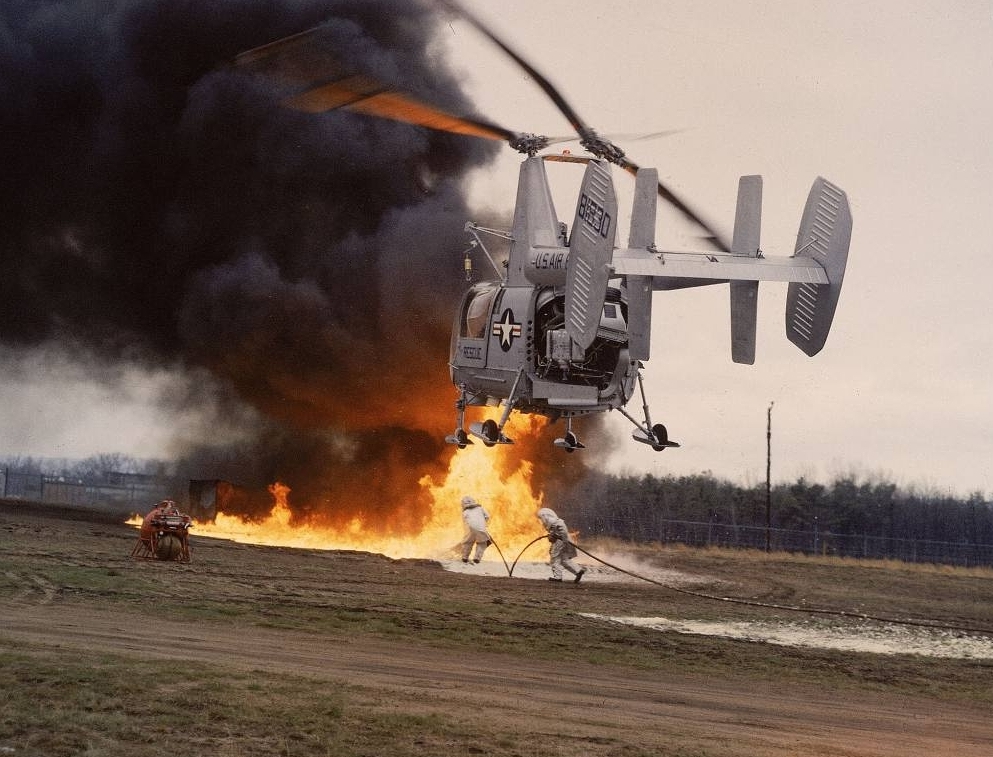 A helicopter crash at 3:06 pm Saturday caused a slight change in the hugh Share in America Armed Forces Day program at James Connally AFB , witnessed by an estimated 30,000 persons.

The fire-fighting demonstration officially tabbed for 3:45 pm began at 3:06 pm.

As a result the always exciting fire fighting show packed about as hard a wallop as the helicopter, which hit the runway and burst into flames as it skidded approximately 500 yards.

Only persons hurt were five spectators who were hit by flying splinters. They all were treated and released at the base hospital.

Lt. James C. Greenway III and his crew chief, SSgt Jimmy R. Haddox, who had brought their new H-43A from Connecticut only 10 days ago, climed out of their blazing ship and ran to safety.

Approximately 15,000 were on the base at the time of the crash. Two of the H-43As just had finished a synchronized flying exhibition. This type of ‘copter is noted for its high maneuverablility.

Then the team effort broke up. One of the H-43As made a fly-by to demonstrate speed. The other went up to a height estimated at from 700 to 2,000 feet.

Ey witness reports on what happened differ as much as the difference in height estimates.

Anyway, Lt. Greenway and his chief planned to demonstrated the stopping powers of their craft. They came down at about a 30-degree angle and were supposed to change the pitch of the props, immediately hovering instead of descending. An official investigation has not revealed what went wrong.

Anyway there was hovering to it. The ‘copter hit the runway, loosing both propellers, its wheels and other smaller pieces. It bounced, slipped on its side and started its long skid along the runway. It caught fire during the skid. Both men hooped out as soon as it stopped and ran toward  the crowd. The ambulance quickly went to the scene “just in case “ .

Everyone agreed the fire show was far more exciting than it would have been had those drums of old oil been set afire at 3:45 pm.

CONNALLY AFB, TEX. -- The F-89 was preparing to land when there was an explosion in the right engine and flames, four times as large as the aircraft, blos­somed forth. The pilot, lst Lt. Clyde Falls, success­fully completed his landing despite the fire.

Meanwhile, a H-43A being flown by lst Lt. Glyneth M. Gordon on a night transition flight, had been alerted to the emergency and followed the F-89 down the runway. As the F-89 came to a stop, Lieutenant Gordon used the helicopter rotor downwash to blow the flames away from the cockpit and enabled the F-89 radar observer, 2nd Lt. Jay A. Johnson, to evacuate the aircraft without incident. Lieutenant Falls, however, was delayed when his personal equipment caught in the cockpit. During the brief delay, the H-43A downwash kept flames away from Lieutenant Falls until he also evacuated.

A Scroll of Honor was awarded by Kaman Aircraft re­cently to 1st Lt. Glyneth M. Gordon, H-43A pilot from the Helicopter Unit at James Connally AFB, Tex. His quick action and proficiency in using the helicopter's rotor downwash to beat back the flames from a crashed aircraft allowed the plane's occupants time in which to escape.

Rescue from crash fire utilizing techniques de­veloped by Kaman Aircraft and Wright-Patterson AFB technicians was an entirely new concept coupled with the introduction of the Kaman H-43B. This was the third in­cident in which the system has been proved in an actual crash rescue mission.

( source : “A chronological listing of rescue reports as received from the field by the Kaman Aircraft Corporation” - 27 July 1961  , Connally AFB.  ) 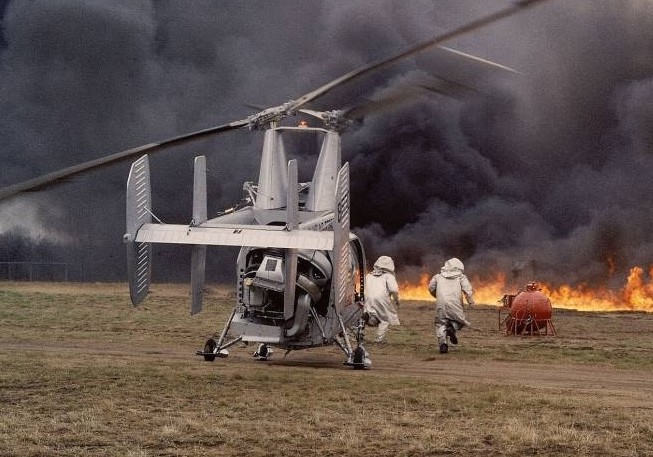 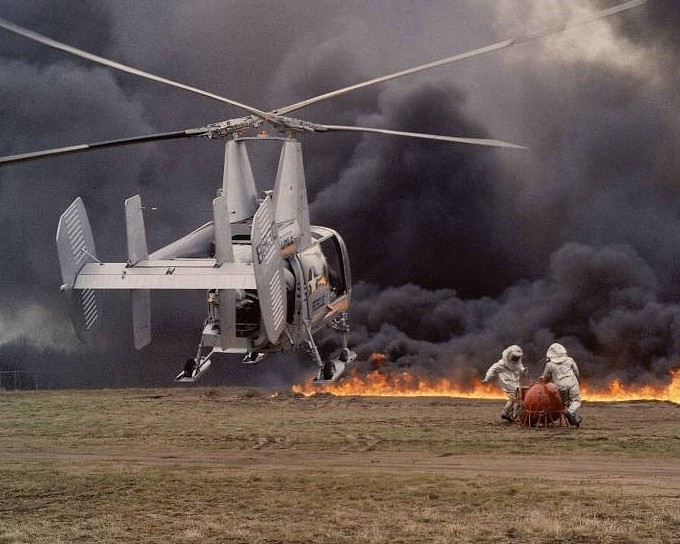